– All selected players are returning from Lima 2019 Parapan Am squad
– Paralympic Games will take place August 24 to September 5, 2021

OTTAWA, ON, July 22, 2021 /CNW/ – The athletes set to represent Canada in women’s sitting volleyball at the Tokyo 2020 Paralympic Games this summer have been selected, the Canadian Paralympic Committee (CPC) and Volleyball Canada announced today.

«I feel so grateful to be a part of Canada’s sitting volleyball program heading to Tokyo 2020 for our second Paralympic Games!» said team captain Danielle Ellis. «I am so proud of the work that each one of us has done over the last five years and am so excited to compete against the best teams in the world, and show those teams that Canada means business. We’re ready to fight!»

Canada’s women’s sitting volleyball squad earned its spot at the Games with a victory in its last-chance qualification tournament, hosted in Halifax in February 2020. The team beat out four other nations to take the last ticket to Tokyo. Canada will be making its second straight Paralympic appearance in the women’s event after debuting at the Rio 2016 Games.

«The wait for this Paralympic Games has been different and long, but regardless of our circumstances throughout the last year and the four years before that we found ways to improve every day,» said Heidi Peters. «I cannot wait to compete and represent Canada alongside these incredible women. We’ve barely scratched the surface of what this team is capable of and I’m ready to show the world our growth!»

Canada, who is currently ranked fifth in the world, will be in competition alongside seven countries: USA, China, Italy, Brazil, Rwanda, Japan, and RPC. The round-robin groups and match schedule have yet to be determined. Sitting volleyball competition will run from August 27 to September 5.

«I am beyond proud to coach such a strong and resilient group of athletes who have continued to improve both physically and mentally despite the uncertainties of this past year,» said women’s sitting volleyball head coach, Nicole Ban. «Each athlete’s dedication to this program has been evident throughout this quad, earning us the opportunity to compete against the world’s best in Tokyo. We have made huge strides since our Paralympic debut in Rio in 2016 and we look forward to showcasing that next month.»

Sitting volleyball has been part of the Paralympic Games program since 1980 though the women’s tournament was only added in 2004. Rio 2016 was the first year Canada qualified in the sport, with the women’s team achieving the feat and earning a seventh-place result.

Another version of Para volleyball, standing volleyball, was a Paralympic competition for men from 1976 to 2000. Canada has never made the podium in sitting volleyball but captured a silver medal in the standing version in 2000.

The Canadian men’s team missed out on a berth to Tokyo, finishing sixth in their final qualification tournament last month.

«This is an incredible group of athletes, and it is an absolute pleasure to welcome them to the Canadian Paralympic Team,» said Stephanie Dixon, chef de mission, Tokyo 2020 Canadian Paralympic Team. «I know how hard this team has worked to qualify for their second straight Paralympic Games and solidify their place as one of the top nations in the world. I am excited to cheer them on in Tokyo!»

The postponed Tokyo 2020 Paralympic Games will take place August 24 to September 5, 2021 in Japan. Canada is expecting to send a team of approximately 130 athletes, and audiences across the country will be able to follow all the action live through coverage from the Canadian Paralympic Media Consortium, including broadcast partners CBC/Radio-Canada, AMI, and Sportsnet, and digital partners Twitter, Facebook, and MXZN.

About the Canadian Paralympic Committee: Paralympic.ca 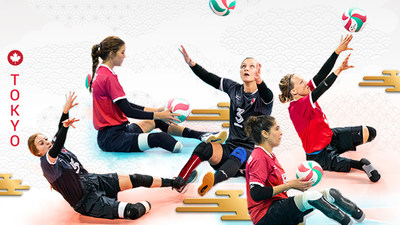