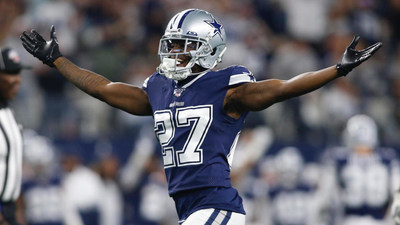 A First-Team All-American, and First-Team All-Big Ten player in 2015 and 2016 from the University of Michigan, Lewis grew up in Detroit and has played with the Cowboys since 2017.  Drafted in the 3rd Round (92nd pick), Lewis is coming off his best season yet.  Despite only five starts and playing 55% of the snaps in 2019, Lewis led the Cowboys in interceptions, led the defensive backs in sacks, was 4th in pass deflections, and was the only defender to record a touchdown.

«I am excited to join the VIP family!» Lewis said.  «The VIP team understands me, my goals, aspirations, and ambition. Like me, they are nimble and quick, and they look out for the best interest of their players, on and off the field.»

«We are extremely excited to work with Jourdan, who has risen like a technician out of the ashes from our stomping grounds in Detroit; and is someone who possesses an extremely bright future,» said Paul Bobbitt of VIP Sports Management. «Jourdan has shown glimpses of greatness and he strives to be one of the best defensive backs in the NFL; he is going to make a big impact on and off the field.  David and I plan to make sure he’s well-represented at contract time.»

Lewis, whose contract with the Cowboys runs through the end of the 2020-2021 Season, was part of Detroit Cass Technical High School’s 2011 and 2012 state championship teams and was a 4-star recruit.

Midwest renowned, Foss Swim School, Announces the Opening of its Newest Location on the Border of Richfield/Edina, Minnesota