ST. SIMONS ISLAND, Ga., Oct. 8, 2020 /PRNewswire/ — Farm Rich, one of America’s favorite frozen snacks and appetizers brands, and the Southeastern Conference (SEC) have announced an exclusive three-year sponsorship that will feature Farm Rich as the «Official Frozen Snack of the SEC» across all SEC sports, including football, basketball, baseball, soccer, tennis, gymnastics and more. 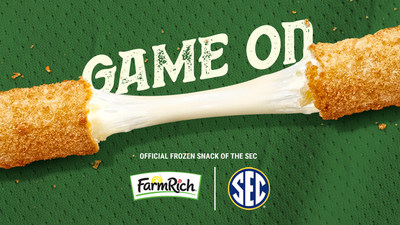 Farm Rich joins as an Official SEC Conference Sponsor – a first for the brand – with marketing exclusivity across the entire frozen snack food category. The sponsorship runs for three football seasons and kicks off with the 2020 SEC football season.

«When it comes to game-day foods, Farm Rich is a snack of choice among sports fans, and we are so proud to team up with the SEC to be the ‘Official Frozen Snack’ of the conference,» said Ciera Womack, Farm Rich Senior Marketing Manager. «Fans everywhere are thrilled that football has returned to the fields this fall and even though stadiums may look different, we can all still watch and enjoy the games from home. This exclusive, multi-tiered partnership is a great fit for our brand, which is also based in the Southeast, and gives us many cross-promotional opportunities across multiple sports.»

As the SEC’s Official Frozen Snack partner, Farm Rich will have exposure in more than 1,600 SEC events on-air, radio, print and digital, and will be featured as:

«We are pleased to welcome Farm Rich as an SEC official sponsor,» said SEC Commissioner Greg Sankey. «Based in St. Simons Island, GA, the longtime home of the SEC Men’s Golf Championship, Farm Rich is a perfect fit into the SEC family of sponsors. We’re proud to have another quality company like Farm Rich join our sponsor program.»

A new TV spot is currently being developed to air on the SEC Network later this year. National promotions are also in the works, including a social media sweepstakes featuring brand mascot Frank the goat, who will recruit fans to show off their football spirit with decorated lawns, with winners receiving Farm Rich sponsored at-home tailgates featuring a «goat-load» of snacks and more.

Other featured programs and activations will be announced in 2021.

About Farm Rich
A division of Rich Products, Farm Rich is one of the nation’s leading frozen snacks and appetizers brands. The company is based in St. Simons Island, Ga., and features a full portfolio of frozen snack and appetizer products, as well as plant-based offerings, made for snacking when you want, how you want. Farm Rich Snacks are made with wholesome, great-tasting ingredients, and are sold at grocery and club stores nationwide, and online. For products, nutritional information, recipes and more, visit FarmRich.com.

About the SEC
A pioneer in the integration of higher education and athletic competition, the Southeastern Conference is a leader on the national landscape for intercollegiate athletics in the 21st century. Since its formation in 1933, the SEC has achieved stature and stability by designating governing/voting power to the presidents of the member institutions. These university leaders determine the policies of the conference and through the years this involvement has been the principal source of strength in the evolution of the SEC. Throughout its history, the SEC has provided leadership on the vital issues facing intercollegiate competition. Alabama, Auburn, Florida, Georgia, Kentucky, LSU, Mississippi, Mississippi State, Tennessee and Vanderbilt have been in the SEC since its formation in 1933. The league has expanded twice, adding Arkansas and South Carolina in 1991, then Missouri and Texas A&M in 2012.

About SEC Network
The Southeastern Conference and ESPN launched SEC Network on August 14, 2014. The network televises hundreds of games across the SEC’s 21 sports annually. Programming includes in-depth analysis and storytelling in studio shows such as SEC Nation, Thinking Out Loud and Rally Cap, daily news and information with SEC Now, original content such as TrueSouth, SEC Storied and SEC Inside, and more. Hundreds of additional live events are available for streaming exclusively on SEC Network’s digital companion, SEC Network+, via the ESPN App and SECNetwork.com. The network is also available in more than 135 countries throughout Europe, Middle East, Africa and Asia via ESPN Player, ESPN’s sports streaming service in the region.

Academy Sports + Outdoors Announces Appointment of Tom M. Nealon to Board of Directors