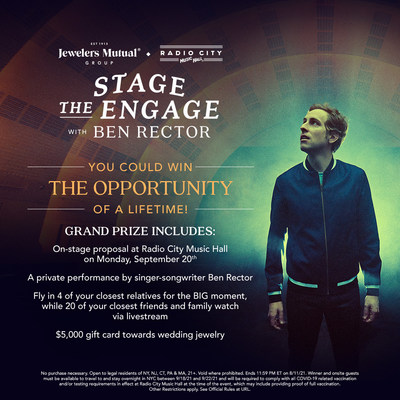 One lucky couple will win a flight to New York City, a private Ben Rector performance at Radio City Music Hall and a $5,000 gift card for use toward their wedding jewelry, plus they will be able to bring in four of their closest relatives or friends for the proposal event and invite 20 friends and family to watch via livestream.

«For over 100 years, Jewelers Mutual has protected jewelry and the emotional connection it has in our lives, said Tyler Krowiorz, director of marketing at Jewelers Mutual Group. «With so many couples postponing proposals and weddings during 2020, we wanted to help two lucky winners get their life together started in a memorable way. We’re thrilled to team up with Ben Rector and MSG Entertainment to help bring this dream proposal to life at Radio City Music Hall.»

For more information about the Stage the Engage contest, visit radiocity.com/stage-the-engage.

ABOUT JEWELERS MUTUAL GROUP
Jewelers Mutual Group was founded in 1913 by a group of Wisconsin jewelers to meet their unique insurance needs. Today, the Group offers products and services nationwide and throughout Canada that enable jewelry businesses to run safe, secure, and successful operations. Consumers also put their trust in Jewelers Mutual to protect their personal jewelry and the special moments it represents. The Group insurers’ strong financial position is reflected in their 34 consecutive ratings of «A+ Superior» from A.M. Best Company, as of November 2020. Insurance coverage is offered by either Jewelers Mutual Insurance Company, SI (a stock insurer) or JM Specialty Insurance Company. Policyholders of both insurers are members of Jewelers Mutual Holding Company. To learn more, visit JewelersMutual.com.

ABOUT BEN RECTOR
You love Ben Rector’s music… you just might not have realized it yet. Called «exactly what the world needs» by The Collegian and praised for a sound that «perfectly encapsulates all the warm feelings» by People Magazine, this songwriting polymath has flown a hair’s breadth under the mainstream radar for over a decade. In that time he has amassed over a billion streams across all platforms; played live on a number of national television shows, including Jimmy Kimmel, Conan, The Today Show, and more; had his music featured in over a hundred TV shows, ads, and films including Pretty Little Liars and Castle (his single «Brand New» is one of the most licensed songs for television and film in the last five years); hit the number one spot on Billboard’s US Folk chart and the number nine spot on their top 200; mentored stars of tomorrow on ABC hit show American Idol; sold out three consecutive nights at the legendary Ryman Auditorium as well as countless other theatres and arenas around the country… and that’s just the start – not bad for an artist that’s chosen to remain largely independent. There’s an understated magnetism to Rector and his «meticulously crafted, shamelessly romantic folky pop» (Chicago Tribune). He’s Nashville’s worst-kept, best-kept secret, and if you’ve never heard his name before, now you’ll never forget it.