NEW YORK, Sept. 21, 2020 /PRNewswire/ — Korean Cultural Center New York (KCCNY), a branch of the Ministry of Culture, Sports and Tourism (MCST) of the Republic of Korea in partnership with the Sejong Center is pleased to announce the launch of the online performance of «N.O.T» by the Seoul Metropolitan Dance Theater on Friday, September 25th at 8 pm ET. The online premiere will be held with a Live Chat hosted by the Performing Arts Director Hyo Han of the Korean Cultural Center as well as the Seoul Metropolitan Dance Theater. 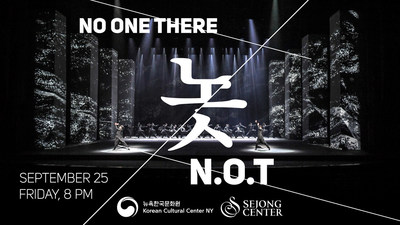 «N.O.T» short for «No One There,» tells the story of our inability to communicate amid the various conflicts of the current times. It is a representative work that expresses the Seoul Metropolitan Dance Theatre’s distinct creative movement languages, combining traditional Korean movements with a modern style. It features large-scale group dance scenes with a unique dreamy style of choreographic production.

This launch is presented as a part of the KCCNY’s «Experience Korean Cultural Center Online» initiative, a comprehensive online platform that brings together world-class performances and diverse cultural contents from the KCCNY and from various branches of the Ministry of Culture, Sports and Tourism including limited view screenings of performances of the National Theater of Korea, online viewings of exhibitions from the Museum of Modern and Contemporary Art of Korea, the Korean Food Promotion Institute, and the Korean Film Archive among more.

Performance Synopsis:
A 10-year-old girl, trapped in the mind of an 80-year-old grandmother, embarks on a journey to find her parents with whom she had separated during the Korean War. Her quest acts as a striking allegory to the conflicts and dysfunction that our contemporary society is fraught with, while also sharing a message of healing across boundaries for a world of peaceful coexistence.

The Sejong Center
The Sejong Center was established by the Seoul Metropolitan Government as Seoul’s representative culture and arts institution. Built in 1978 and reborn as a foundation in 1999, it has been dubbed the hub of Korean performance culture and as it plays a key for Seoul’s art scene.