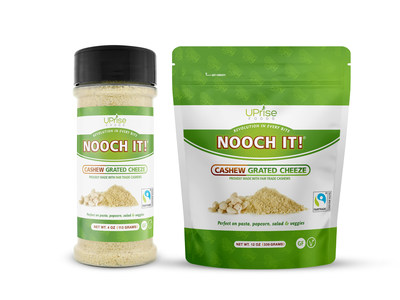 Ben Taylor, Uprise Foods founder, said, «We’re delighted that Uprise Foods is the first certified fair trade cheese vegan cheese company, and we hope that other companies will follow our lead. Demand for plant-based foods is soaring. More than half of Americans are expressing interest to eat more vegan meats and dairy alternatives.»

With NOOCH IT! positioned as Amazon’s #1 selling dairy alternative cheese since 2018, Uprise Foods is well aware of the increasing demand for nut-based cheeses. NOOCH IT! is a cashew-based grated-style parmesan alternative. Although it is vegan, Uprise’s customer base spans all dietary preferences who enjoy it as a condiment or cooking ingredient on everything from popcorn and pizza, to pasta and soups.

Taylor said that his product is 100 percent plant-based and made entirely from organic and non-GMO ingredients. «Ingredient transparency is a founding principle of our company. Our core belief is that food should be both pleasurable and critical to good health.»

«We believe that Uprise is among those at the forefront of raising awareness of the often-perilous farm-to-table journey of cashews,» Taylor said. «We’ve been using fair trade cashews since 2017.»

Uprise joined Fairtrade International to play a part in helping to secure a better deal for 1.6 million farmers and workers globally. The Fairtrade Mark helps consumers identify products that align with their values and is the most widely recognized ethical label globally.

«Cashews are in the poison ivy family and processing is often in unsafe conditions that can cause damage to workers’ hands, eyes, and lungs,» said Taylor. «Fair trade is about respect, every purchase we make is a vote with the wallet. Fair trade purchases show respect for the people who provided food for us, and respect for ourselves and who we are as individuals.»

In the U.S., Fairtrade America partners with 100+ brands in certifying supply chains according to rigorous social, environmental, and economic standards. Globally, NOOCH IT! now joins 2,400 companies and a collection of more than 30,000 Fairtrade certified products sold in 130 countries.

In addition to Amazon, UPrise Foods has a retail presence in over 300 stores on the East Coast including Big Y and Roche Bros supermarket chains, as well as a number of independent grocery stores in the Midwest and West Coast.