NEW YORK, Oct. 21, 2020 /PRNewswire/ — Jane and Scott Wolfe, founders of Melba’s Old School PoBoys, today announced the publication of From GED To Harvard Then Inc. 500: How Two Teens Went From GEDs To Building The Fastest Growing Business In New Orleans. The book is published with ForbesBooks, the exclusive business book publishing imprint of Forbes. 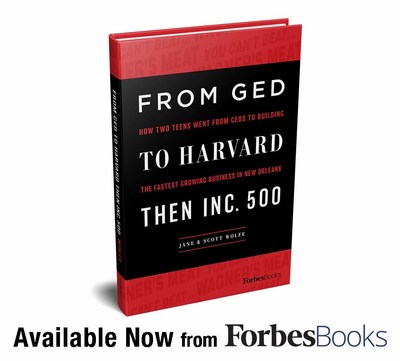 Throughout their lives, Jane and Scott Wolfe started multiple businesses with a single purpose: to engage with their community. They began in 1982 when, as teenagers, they bought a rundown market in New Orleans’ Ninth Ward. Wagner’s Meat became a fixture in the neighborhood and grew to have ten locations across the city over the next 25 years. Then, in 2005, Hurricane Katrina hit New Orleans and destroyed everything they had built.

In the aftermath of the hurricane, the Wolfes started again, first by launching a construction company, Wolfman Construction, to help rebuild their community. Then in 2012, they founded Melba’s PoBoys, which Inc. Magazine later recognized as 2017’s fastest-growing company in Louisiana. From GED to Harvard Then Inc. 500 serves as a roadmap for entrepreneurs wishing to tap into the mindset at the core of the Wolfe’s success: how to serve the communities where you live and how to thrive after a catastrophe.

«Scott and Jane Wolfe’s journey epitomizes the values of perseverance, passion, and a commitment to community,» said former Mayor of New Orleans, Marc Morial. «They have defined what it means to function as a double bottom-line business in twenty-first-century New Orleans.»

From GED To Harvard Then Inc. 500: How Two Teens Went From GEDs To Building The Fastest Growing Business In New Orleans is available on Amazon.com today.

About Jane & Scott Wolfe
Jane and Scott Wolfe are the founders of Melba’s Old School PoBoys in New Orleans, which joined the Inc. 500’s Fastest Growing Companies list in 2016. Starting as teenage entrepreneurs in 1980, the Wolfes founded and operated multiple businesses in New Orleans, including Wagner’s Meat markets and Wolfman Construction.

A graduate of Harvard Divinity School, Jane also credits higher education for providing her with a broader, richer perspective on the finer connections between business, politics, and religion that drive a company’s success. Scott has developed many properties in the New Orleans metro area.

Jane and Scott work and live in New Orleans.

About ForbesBooks
Launched in 2016 in partnership with Advantage Media Group, ForbesBooks is the exclusive business book publishing imprint of Forbes. ForbesBooks offers business and thought leaders an innovative, speed-to-market, fee-based publishing model and a suite of services designed to strategically and tactically support authors and promote their expertise. For more information, visit forbesbooks.com.