«SS&C GlobeOp’s Capital Movement Index for August 2020 rose 0.55%, indicating positive net flows. On a comparative basis, the 0.55% gain was higher than the 0.45% increase reported for the same period a year ago and was also the largest net inflow for any month of August since 2016,» said Bill Stone, Chairman and Chief Executive Officer, SS&C Technologies. «In the six months since the COVID19 has roiled markets and caused major economies to partially shut-down, hedge fund capital movements have been very stable by historical standards, indicating investor confidence in managers’ ability to generate attractive returns while managing risk.» 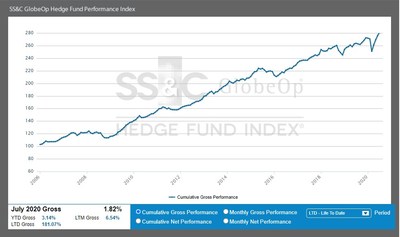 The SS&C GlobeOp Hedge Fund Performance Index is an asset-weighted, independent monthly window on hedge fund performance. On the ninth business day of each month it provides a flash estimate of the gross aggregate performance of funds for which SS&C GlobeOp provides monthly administration services on the SS&C GlobeOp platform. Interim and final values, both gross and net, are provided in each of the two following months, respectively. Online data can be segmented by gross and net performance, and by time periods. The SS&C GlobeOp Hedge Fund Performance Index is transparent, consistent in data processing, and free from selection or survivorship bias.  Its inception date is January 1, 2006.

The SS&C GlobeOp Hedge Fund Performance Index offers a unique reflection of the return on capital invested in funds.  It does not overstate exposure to, or the contribution of, any single strategy to aggregate hedge fund performance. Since its inception, the correlation of the SS&C GlobeOp Performance Index to many popular equity market indices has been approximately 25% to 30%. This is substantially lower than the equivalent correlation of other widely followed hedge fund performance indices. 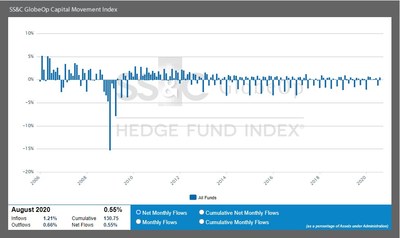 Published on the ninth business day of each month, the SS&C GlobeOp Capital Movement Index presents a timely and accurate view of investments in hedge funds on the SS&C GlobeOp administration platform. Data is based on actual subscriptions and redemptions independently calculated and confirmed from real capital movements, and published only a few business days after they occur. Following the month of its release, the Index may be updated for capital movements that occurred after the fifth business day.

The SS&C GlobeOp Hedge Fund Index (the Index) is a family of indices published by SS&C GlobeOp. A unique set of indices by a hedge fund administrator, it offers clients, investors and the overall market a welcome transparency on liquidity, investor sentiment and performance. The Index is based on a significant platform of diverse and representative assets.

The SS&C GlobeOp Hedge Fund Performance Index is an asset-weighted benchmark of the aggregate performance of funds for which SS&C GlobeOp provides monthly administration services on the SS&C GlobeOp platform. Flash estimate, interim and final values are provided, in each of three months respectively, following each business month-end.

While individual fund data is anonymized by aggregation, the SS&C GlobeOp Hedge Fund Index data will be based on the same reconciled fund data that SS&C GlobeOp uses to produce fund net asset values (NAV). Funds acquired through the acquisition of Citi Alternative Investor Services are integrated into the index suite starting with the January 2017 reporting periods. SS&C GlobeOp’s total assets under administration on the SS&C GlobeOp platform represent approximately 10% of the estimated assets currently invested in the hedge fund sector. The investment strategies of the funds in the indices span a representative industry sample. Data for middle and back office clients who are not fund administration clients is not included in the Index, but is included in the Company’s results announcement figures.

Additional information about SS&C (NASDAQ: SSNC) is available at www.ssctech.com.