TUCSON, Ariz., Oct. 2, 2020 /PRNewswire/ — The announcement that President Trump and the First Lady have tested positive for SARS-CoV-2 shows that the need for early treatment to prevent serious illness and death from COVID-19 is extremely urgent, states the Association of American Physicians & Surgeons (AAPS). 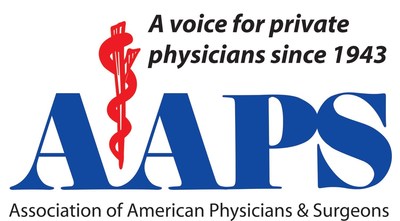 Thousands of physicians worldwide are using HCQ with zinc and azithromycin or doxycycline, and are reporting excellent results. Nations where HCQ is widely and freely used have a death rate 73 percent lower than nations such as the U.S. in which its use is discouraged or restricted.

Adequate levels of vitamin D and zinc are critical for resisting viral infections, notes AAPS. A number of other treatments including ivermectin and corticosteroids are also showing great promise.

HCQ in an appropriate dose is one of the world’s safest medicines, safer than most drugs available over the counter, AAPS points out, as shown by more than 65 years of use in hundreds of millions of patients.

The President has stated that a vaccine will be available soon, but that will be too late for patients already infected.

A few powerful bureaucrats, including Anthony Fauci and some in the FDA and other agencies, have used their influence to keep most Americans from receiving early home treatment. According to Yale epidemiologist Harvey Risch, the result may have been 100,000 needless deaths.

Courts have so far declined to order the FDA to stop hoarding the Strategic National Stockpile of HCQ and to withdraw the opinion-based negative statements cited by state agencies that restrict HCQ use. The Sixth Circuit Court of Appeals just denied the AAPS emergency motion that requested this relief.

It is past time for the President to overrule the naysayers so that physicians will be free to prescribe as they see fit—while protecting his own health and his First Lady’s.

AAPS has represented physicians of all specialties in all states since 1943. The AAPS motto is omnia pro aegroto, meaning everything for the patient.